Trainings in virtual reality and service support in augmented reality. 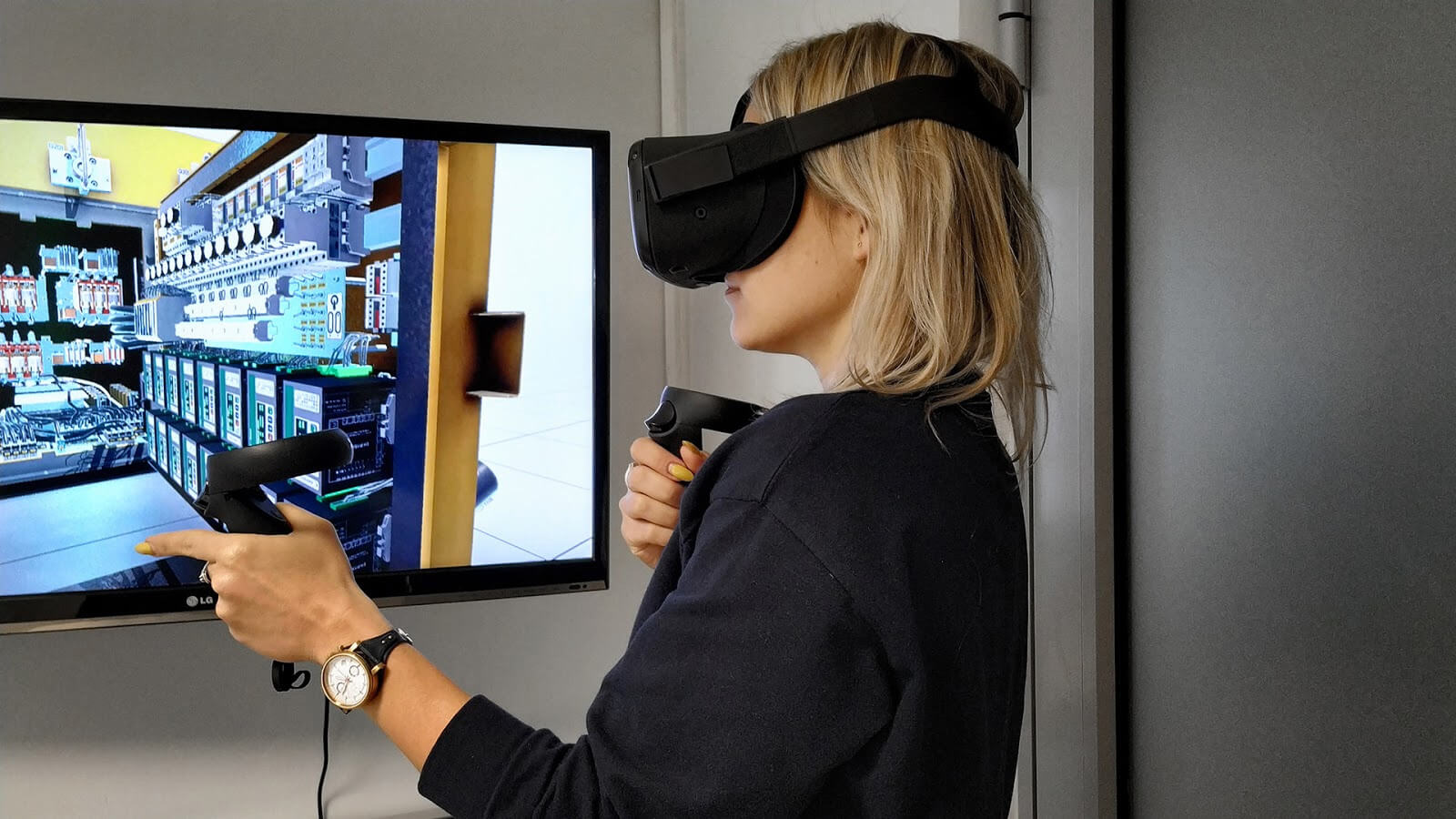 Cooperation with FAMUR S.A. allowed us again to launch the entire layers of creativity we have.

Request:
Creating a set of interesting, eye-catching and technologically advanced trade fair applications, which, according to our constant assumption, will not be a one-off product, but will respond to the company’s long-term demand and be able to be developed in the future. Applications should also reflect the company’s desire to use new technologies in the near future in many areas of its business in line with the idea of ​​Industry 4.0.

Challenge:
Heavy mining equipment are machines working in difficult conditions, often produced singly, expensive and rarely available. Training employees on the use of such machines is always a big logistic challenge and considerable costs. It requires not only access to equipment, but also often ensuring appropriate conditions and safety for inexperienced – future team members. This equipment also needs constant care and servicing so that it works reliably and does not pose a threat, and the number of procedures to perform and elements to check is very large

Solution:
Famur S.A. decided to meet this demand and, in line with its development strategy, apply the latest technologies more widely. After analyzing the demand from several company departments, we have prepared a proposal for implementing an application presenting in virtual reality the basic service procedures for three machines. Thanks to this, we respond not only to the current marketing needs of the company, but also support the service department in the long term by enabling trainings in virtual reality. The VR application is supplemented by the AR application, which on the printed 3D model of the actual machine presents messages/reports about the operation of individual parts, and also guides the employees through a checklist necessary to perform service activities. 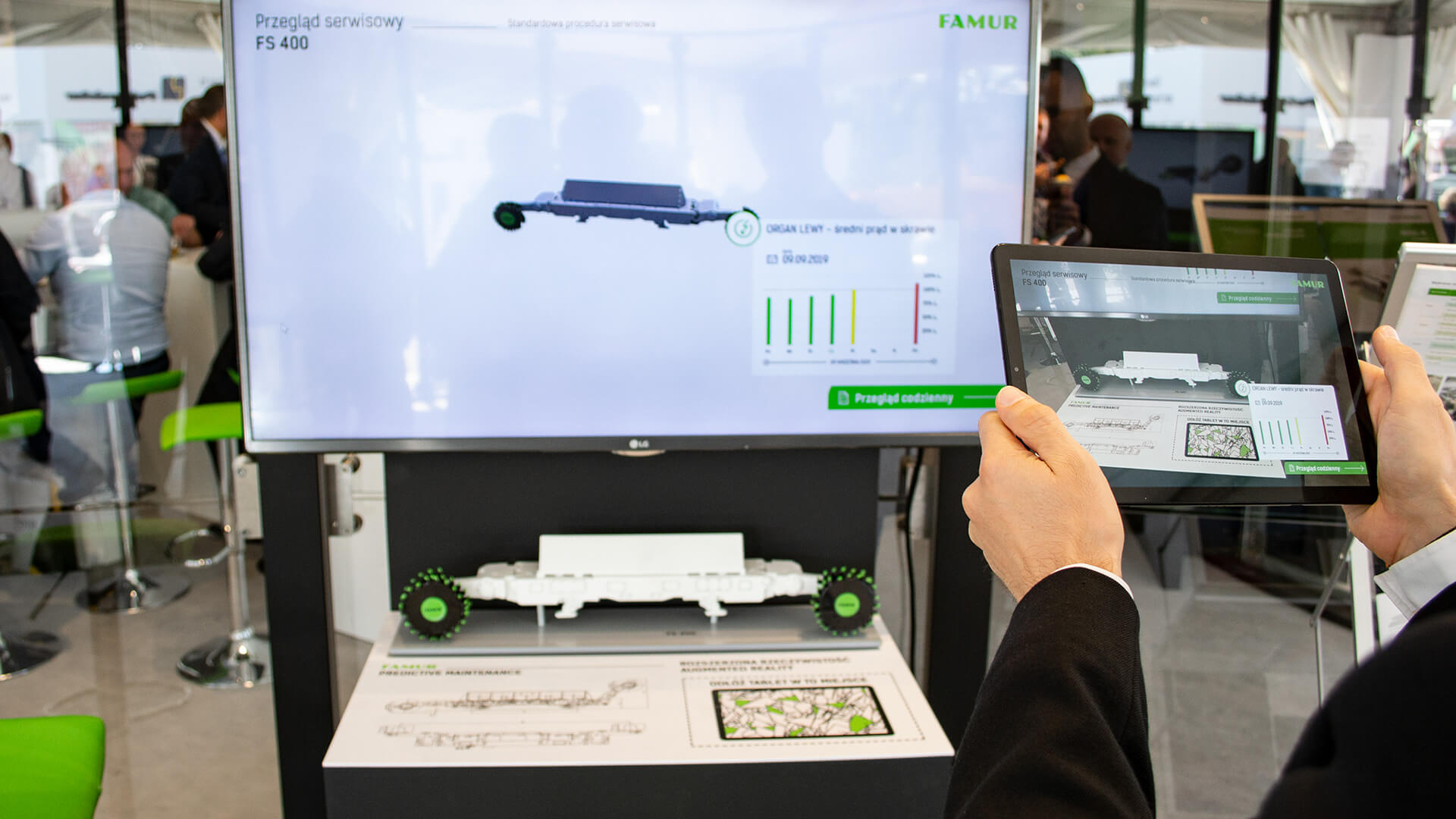 Realization:
At the beginning, three machines were selected, which the company wanted to present at the fair, and for which the virtual presentation had the greatest potential for development and use in the future. Then our employees for several weeks recorded individual service procedures to have possibly the most accurate output material. The procedures have been filmed, written down and approved by engineers. Then, our graphic team based on CAD files prepared detailed 3D models of machines and their components, mapping the sensitive points with the highest possible accuracy.

At the same time, a team of programmers and designers worked on an application mockup, description of functionality and interface designs. We developed a way of operating the application that is as intuitive as possible, both from the point of view, of the user of VR helmets and the trainer. First of all, we wanted the presentation – despite the use of virtual reality – to be a group experience, not a one-person one, and that the lecturer had the greatest role in it and had the opportunity to carry out a really effective teaching process. For that purpose two applications were created – one for VR helmets, the other – to manage the presentation and allow for continuous interaction with the trained group. 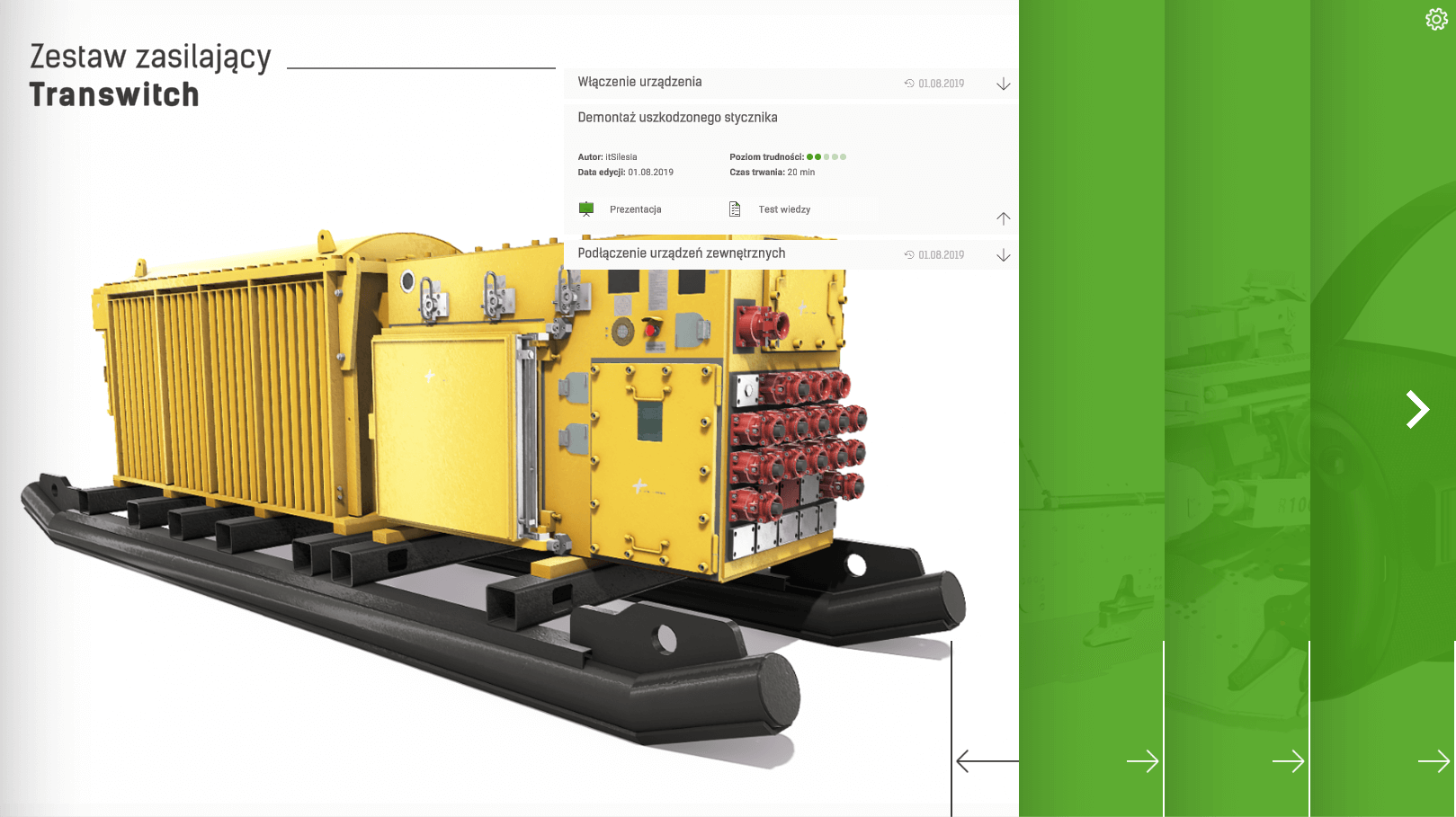 3D models have been developed and optimized to operate in virtual reality. Then the graphic designers mapped a number of service activities, creating their faithful copies in the form of animations. Their accuracy was crucial for the proper transmission of necessary information and presentation of procedures

We gave the trainer a number of tools enabling efficient and, most importantly – effective conduction of presentations. These tools include: an indicator in virtual reality, the ability to force the position of all participants in order to draw their attention to important issues or elements discussed, the ability to inspect user questions. 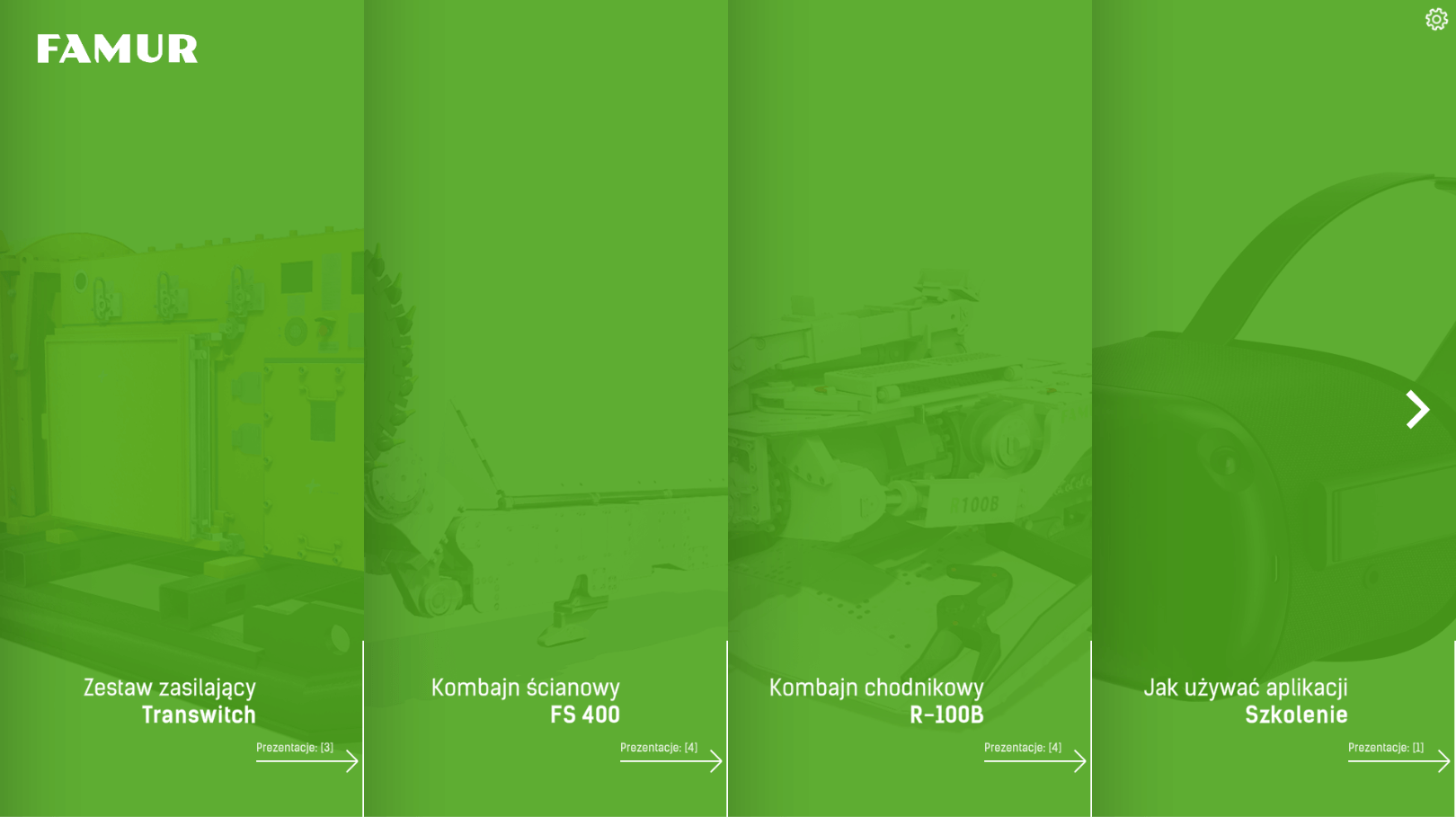 We gave the trainees the possibility to ask questions during the presentation by indicating the point of interest using the VR controller. Users also have the opportunity to move freely in the scene and thus can familiarize themselves with the machine at their own pace outside the planned presentation scenario – after receiving permission from the teacher.

We completed the application with a tutorial for trainees and a test module. Test questions were prepared to verify the knowledge acquired. at the end of each training.

At the same time, we were working on the AR application. After a joint analysis of messages, parameters and alerts that the service department of the company receives every day. We have established a checklist that an employee should have when he wants to start working with the machine. Then we prepared projects and simulation of performing basic, daily machine control. 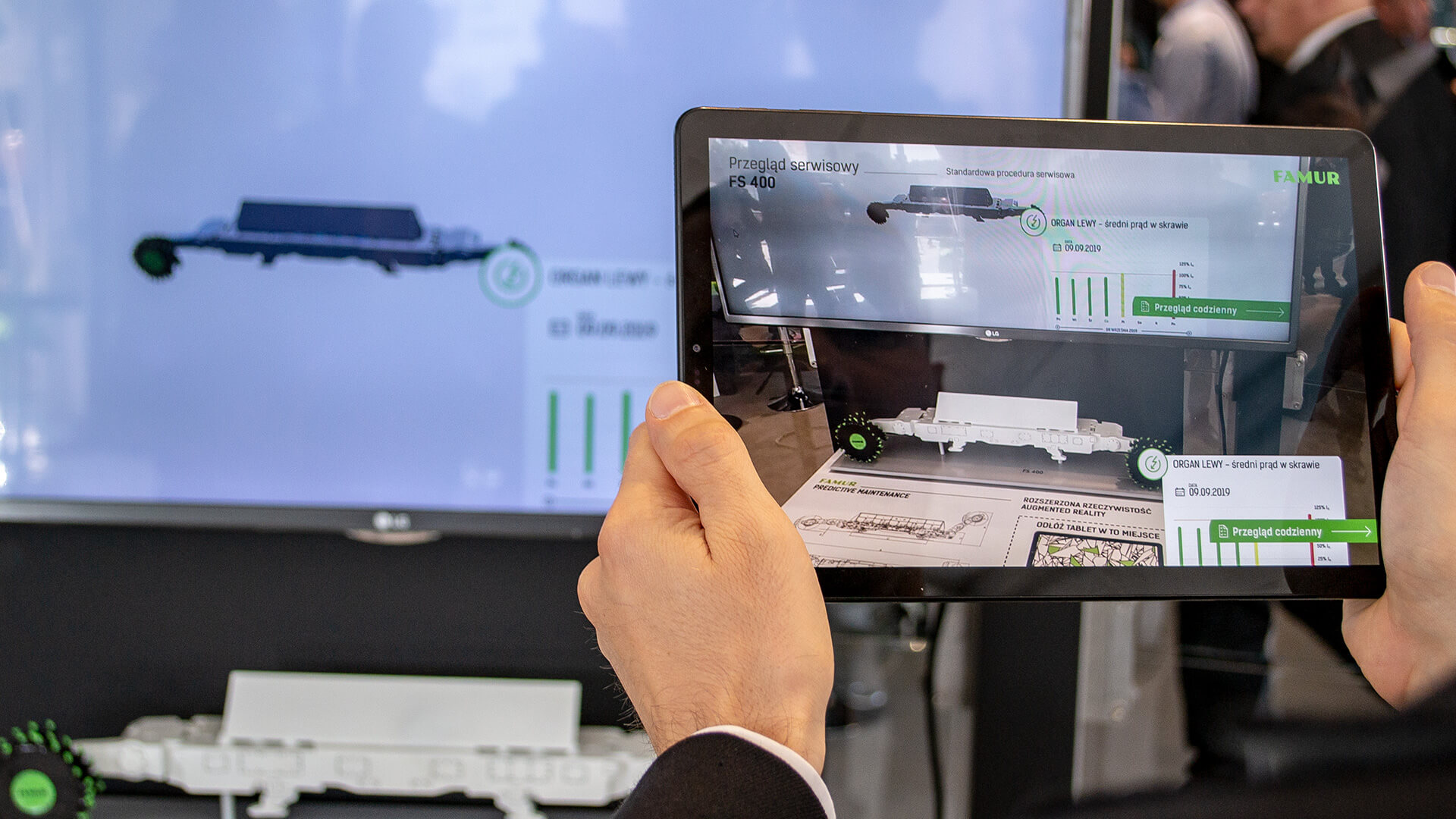 Now thanks to tablets with installed AR application, the user after pointing the camera to the 3D printout of the machine, can  see points that need checking, levels and indicators of selected elements. The application simulates what will happen in the future in real time, in line with the assumptions of the development of industry to industry 4.0. 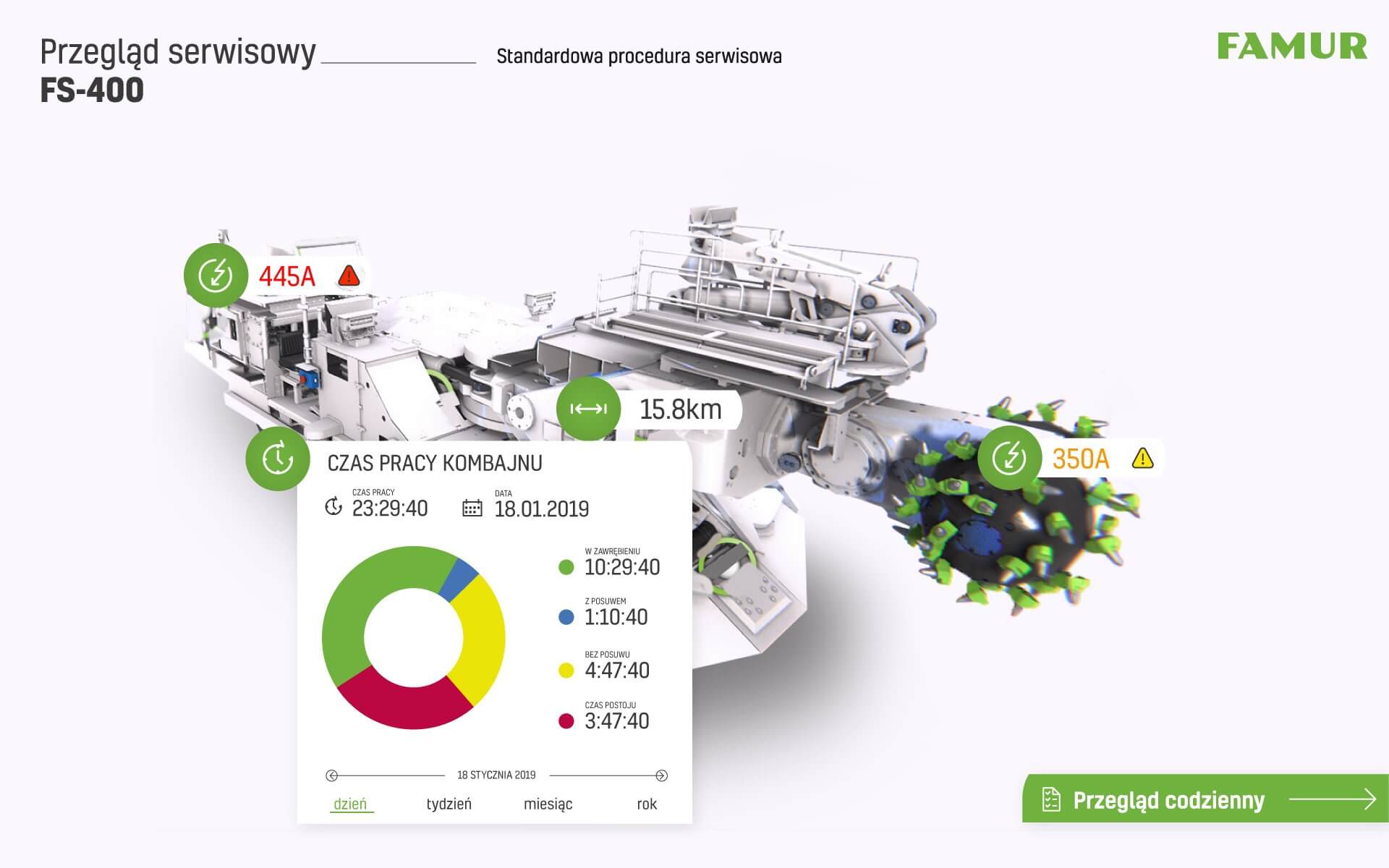